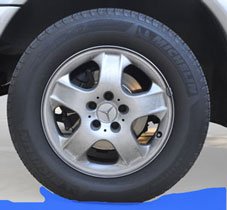 Curves are provided whenever a road changes its direction from right to left or from up to down. Curves are a critical element of roadway design. The design of curves is based on the roadway speed limits and the drainage of storm water.

Approximate safety measures are considered in the design and the maintenance of horizontal and vertical curves to make the roadway safe and decrease the risks of hazardous events.

The geometric design of our highway system is made up of horizontal curves and vertical curves. The alignment of roadways utilizes horizontal curves to transition between straight sections in the roadway. Horizontal curves go to the right or to the left. They are circular curves with minimum radius designed to make the road safe and comfortable.

We design roadways using vertical curves to transition between the changes in elevation of the terrain. Vertical curves are the curves that go up and down through hills and valleys.

The roadway is constructed with a constant slope. The lines of constant slope are referred to as grade tangents and the rate of the slope is called a gradient.

It is critically important to maintain these sags locations to prevent interruption of drainage. The capacity of structures can be severely affected if debris collects on grates and reduces the effective perimeter or the opening of the drainage structure. Water will be pushed into the travel lanes and create hydroplaning conditions.

One of our cases involved a hydroplaning vehicle in which excessive speed was not an issue. We were asked to look at it to determine why water had accumulated in the sag.

Water flowed to the bottom of the vertical sag from four directions. The slope from the north was a long steep grade and the same from the south. Also, constructed at the vertical sag was a driveway into a shopping center. The water also flowed from the inside lane to the outside lane.

The water accumulated in the right (outside) lane. Several vehicles had hydroplaned but recovered and a number had spun out of control but did not hit an oncoming vehicle.

Our case had several young men in a vehicle. They hit the pool of water, spun out, crossed the center line of the roadway and crashed into an oncoming vehicle. The men were killed and several others were injured.

Special design and maintenance consideration must be given to the storm water drainage in these low points. This is especially true of roadways with curb and gutters. The design of a drainage system for a curbed highway pavement section collects runoff in the gutter and conveys it to pavement inlets in a manner that is reasonable safety for traveling public.

Highway maintenance personnel are responsible for providing safe passage of vehicles during the design storm event. As the spread from the curb increases, the risks of hydroplaning in roadway sags increase.

Roadways with grass shoulders can build up higher than the edge of the pavement and prevent storm water from running off the pavement. This is especially dangerous in vertical sags. 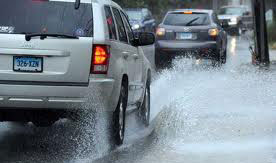 One of our cases involved a vertical curve on a three-lane state route. The grass shoulders accumulated silt and dirt. At the time of the accident the shoulders were approximately 6 inches above the edge of the pavement. This created an opportunity for water to accumulate in the sag.

Nearby was an exit from a dirt pit. Excess dirt would fall from the dump truck when the truck entered the highway. The material would settle in the grass on the roadway shoulders.

Immediately after a rain, a 1998 Ford Ranger drove through the standing water, hydroplaned and crossed the centerline into the path of an oncoming Honda driven by a young woman. It was a fatal accident for the driver of the Honda.

The prevention of hydroplaning in roadway sags is of great concern to the roadway maintenance engineer. Periodic inspections alert highway personnel to potential problems and maintenance scheduled.

If you believe the roadway was a factor in your hydroplaning case, give me a call...

Qualifications of a good hydroplaning expert

Hydroplaning article written by Elvin Aycock for the American Institute of Hydrology.

Ruts cause hydroplaning where the asphalt and the subgrade has failed.

Hydroplaning on roadways while transiting from superelevation to normal crown

Pavement drainage can be a problem in vertical curve sags and in transitions from superelevations to tangent sections.