Improper pavement drainage cause wrecks. Water ponding in travel lanes of high-speed, high-volume highways create a danger to vehicles passing through the water... a vehicle hydroplanes, crosses the centerline of the highway and crashes into an oncoming vehicle.

Motorists simply do not anticipate water ponding on our modern highway systems. The lucky ones hydroplane through the water, recover from the loss of tire/pavement contact and continue on their journey. No vehicles or obstacles happen to be in their path of travel.

The unlucky ones run-off-the-road and collide with trees or obstacles along the side of the roadway or cross the centerline into oncoming traffic. A traveling motorist does not expect water to be in their path of travel. The average driver has no idea what causes hydroplaning or what to be aware of to avoid a hydroplaning accident.

In this article I am going to point out four (4) areas of the highway that are subject to creating hydroplaning conditions. Certain areas of our highways have a higher risk than others. These are 4 of the most critical locations on any roadway. 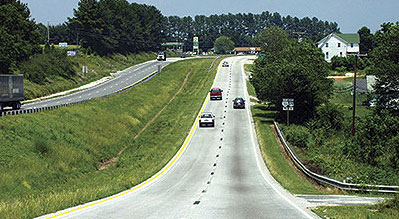 Pavement drainage in vertical sags is one of the highest risk areas on any roadway.

One of our cases involved an accident which killed several young adults. The accident occurred in the vertical sag of the highway. The young driver and 3 of his friends were returning to school in the middle of the day. The driver was driving under the speed limit of the highway.

A sag vertical curve is the low area between two hills. Of course, the top of the hill on a highway is called the crest vertical curve.

Storm water flowed from the crest of vertical curve toward the sag of the vertical curve. Water flows to the sag from two directions. Water that cannot get off the pavement surface reaches the bottom of the hill, increases in depth and creates the conditions for hydroplaning.

In our case, the tire paths had failed and created depressions, which allowed even more water to flow to the bottom of the vertical curve.

So when the storm water reached the bottom of the hill, the water could not flow from the roadway. The water would pool.

The students traveling to school hit the pooling water and their vehicle hydroplaned. The vehicle crossed the centerline of the highway and crashed into an oncoming van. The four young adults were killed in the impact.

A similar accident I reconstructed involved the accumulation of excess dirt and debris on the grass shoulders of the roadway. Again, the shoulder build-up was in the sag of the vertical curve. The elevation of the grass shoulders was higher than the pavement, which caused storm water pool in the roadway. This created conditions for cars to hydroplane.

Approximately 100 yards from the vertical sag was an access road to a dirt pit. Dump trucks were loaded with dirt in the pit. They traveled from the access road exit onto the highway and from there to their destination for the dirt.

The pavement drainage during rain storms flowed to the bottom of the sag of the vertical curve. The storm water could not flow from the roadway until its depth became greater than the grass shoulders. The water would get several inches deep.

The local drivers knew to slow down. But of course along comes a driver that does not slow down, hits the standing water, hydroplanes and crosses the centerline into an oncoming vehicle. The driver of the oncoming car was killed.

Pavement drainage must be monitored by maintenance personnel and problem areas addressed.

Careful evaluation of vertical sags and build-up of grassed shoulders should be made regularly. These are areas of potential hydroplaning wrecks during rain events.

Qualifications of a good hydroplaning expert

Hydroplaning article written by Elvin Aycock for the American Institute of Hydrology.

Ruts cause hydroplaning where the asphalt and the subgrade has failed.

Hydroplaning on roadways while transiting from superelevation to normal crown

Pavement drainage can be a problem in vertical curve sags and in transitions from superelevations to tangent sections.