Scene investigation should be completed as soon as possible. Evidence left at the scene of the accident can provide a great deal of information regarding how the accident happened, whether or not a driver was speeding, and who is at fault for causing the car accident.

Our forensic engineers and traffic accident reconstructionists understand the critical importance of gathering scene evidence as soon after the car accident as possible.

Evidence such as skid marks and paint marks (from police) on the pavement fade away with time due to sun exposure, inclement weather, traffic and other disturbances. Evidence off of the roadway such as tire tracks and skid marks on the shoulder also gets disturbed due to new vegetative growth and mowing. 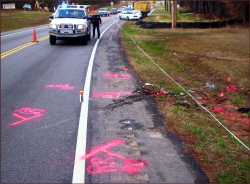 Beyond making sure the accident scene is secure and completing their police report, police officers rarely have the opportunity to collect all of the roadway evidence and perform a thorough investigation. The local police and highway patrol prepare accident reports, take photos, record video footage and often mark a scene.

The phrase "mark a scene" has come to mean that the arriving officers locate key items using spray paint or evidence flags. The evidence marked will depend greatly on the type of accident and the type of vehicles involved.

There are many types of roadway evidence that is left from a car wreck. A few of the most typical items are:

Measurements are taken at the accident scene using surveying equipment so that an accident scene diagram can be prepared showing site specific conditions and roadway evidence.

The drawing is similar to a land survey of the roadway, except that a car accident occurred and roadway evidence such as skid marks, gouge marks, fluid stains, etc. has been left behind. This process of surveying the roadway evidence on the is called scene mapping.

In addition to scene mapping, evidence left at the roadway is documented using photographs and video.

Did the Roadway Defects Contribute to the Accident?

Our forensic engineers are very familiar with design regulations and industry standards that govern how the roadway should have been designed, if any defects exist, and whether or not there were any maintenance problems associated with the cause of the accident.

Do the scene investigation as soon as possible. Roadway evidence begins to disappear soon after the accident. This makes it critically important to have a professional gather the evidence as soon as possible. At Atlanta Engineering Services, our engineers are ready to respond to an accident at any time.

Not only does the roadway evidence begin to fade but vehicles are sold or moved to different locations. Many times we have looked for vehicles only to find out they have been crushed for the value of the metal.